I’m The Short Mom with the Bleeding Tongue!.

It is hard to believe that the month of May is in the books and not only did I fail to write anything share-worthy, I allowed Mother’s Day to pass without a  written tribute to all the awesome MOMS in the world.   As I welcome the new month, I am now staring down the barrel of Father’s Day.  Experience should have taught me to seize the opportunity to compose from the heart about the fathers in my life, before letting myself run out of June, but that would be just too darn tidy for my taste.  Instead, I thought I would share the circumstances behind a few of the pages from the Mother’s Day card Sophi made for me.

Right out of the shoot, she points out the obvious-I am short.  It is true.  I live among giants.  I cannot reach things on the high shelves, I cannot touch the ceiling (with or without jumping) and if we have a family basketball game the offspring who has me on his/her team wants an automatic 10-point spot for the disadvantage.  Note: In the event a serial killer breaks into our house with serious murderous intent, I am little enough hide in the dryer (score 1 for Mom).  Following up my lack of stature, she gives me props for being funny.  This could be viewed as a stand-alone compliment had she not concluded the page by using my own favorite word to describe ME!  Catawampus as a descriptor and referencing my obsession with the very real, albeit elusive, chupacabra lend suspension to whether the folks in the ‘she is funny’ drawing are laughing with me or at me.

PAGE 2: Brave but not Fearless…. 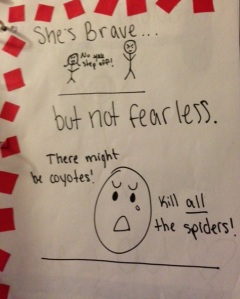 The ‘brave’ picture depicts an event where my mouth simply had overridden any common sense.  Sophi’s basketball team was set to play next on a court where an older age group of girls was playing.   The gym was packed with spectators for the teams playing as wells as the teams waiting to play.  The man from one of the teams (probably a parent) became enraged about a call and started yelling at the referee.  He was ejected from the game and as men, women and small children watched, he made a huge production of walking across the court shouting obscenities as he went.  He managed to drop the F-bomb about a dozen times during his pilgrimage to the gym doors.  I was enraged and in the wake of his door-rattling exit I exclaimed, “Who does he think he is?” and then I gave chase.  He was lumbering down the hallway and I yelled after him, “Hey!  Who do you think you are?  These are KIDS!  You can’t talk like that in front of these kids!  We aren’t going to tolerate it!”  He stopped and I stopped.  He wheeled around and headed toward me (he was WAY bigger than I thought and kept getting bigger the closer we got to each other).  With his big ugly finger pointed at me he yelled, “Lady, you need to step off!”  Note: In that instant, I made a mental note that he just screamed the “F” word numerous times in front of a gym full of people and yet he tells me I need to ‘step off’.   I accepted his watered down challenge and pointed my finger right back at him and countered, “No, YOU need to step off!”  Someone from our team had alerted our coach (who happens to be my husband, Kevin) that I might have bitten off more than I could chew and he quickly found his way to my showdown with the big goon in the hallway.   Kevin rounded the corner (all 6’7” and 250 pounds of him) and what do you know???  Mr. Foul Mouth Buffoon Man decided he should step off after all.   Note:  Kevin was not impressed with my bravery, but I was thankful for his intervention.

Sophi is correct, I am not fearless.  I am terrified of coyotes, medium to big sized spiders, sharks and crocodiles.  Swinging bridges, snapping turtles, the dentist and the big red bull in Uncle Bob’s field also make me a little weak in the knees.

PAGE 3:  She is Strong Inside and Out

This page made me smile.  The truth is, I often need help getting the lid of the jelly jar!  I can’t do a pull-up and I am virtually useless in a tug-of-war game.  It makes me proud that Sophi thinks I am strong on the inside.  Sometimes I feel I am drowning in worry, mostly about things I cannot control.  I equate inner strength with confidence bolstered by unshakable faith-niether are personal strong suits.  Most days I can sport a great game-face, but I want all my kids to know that I have a long way to go in the ‘strength’ department–on the inside and out.

PAGE 4:  She is Selfless.  Always Thinking of Others First.

I think most moms fall into this category.  It is the nature of the job.  I actually feel

fortunate that Sophi summarized my parenting efforts so positively, considering that times that I have failed miserably as a mom.  I am EXTREMEMLY grateful for her omitting these memorable (and slightly damaging Mom moments):

I am pretty sure there are a thousand examples behind this statement that my children would like to strike from their memories.  I own the fact there have been many times when what was on my mind should not have ever passed through my lips.  In all honesty, what was on my mind probably shouldn’t have even been in my mind at all.  Some of the best advice I have ever gotten was from my own sweet mother.  When my oldest daughter was born, the first couple years of her life it was basically just the two of us.  Riley was just a tot when Kevin and I were married and as a daddy goes, he didn’t miss a beat.  However, the day came when he corrected Riley for something and my mama bear claws came out and I unleashed a fury like no other.  Still raging, I called my mom to explain how Kevin had crossed the line by getting onto Riley.   This was my mother’s response:
“You listen to me and you listen good.  You don’t care if he is a daddy to her in every other way.  It’s okay that he puts a roof over her head, food on the table, tucks her in and reads her stories.  It’s fine with you that he plays with her, is proud of her and loves her like his own.  If that man is going to be her daddy, you are going to have to stay out of the way and let him be her daddy all-the-way.  Do you hear what I am saying?  You listen close, because you have trouble with this….If she needs disciplined, you lock yourself in the closet and you bite your tongue ‘til it bleeds, but you stay out of it.  Otherwise, it isn’t going to work.”

As a mom, it is sometimes required to fearlessly speak one’s mind, but equally important to sometimes bite one’s tongue ‘til it bleeds.  Hopefully one day, this mom will learn the difference!