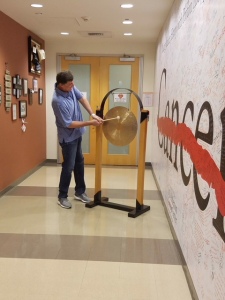 Several times I have sat down to compose an update on Kevin’s cancer treatment and I have found myself overwhelmed by the task of wrangling words into some sort of logical sequence to sufficiently fill the space between the last post and where we are now. Each time, I found myself overwhelmed and unable to whittle down the sum of the experiences into a simplified version of a complex equation.  I would like to point out that this is yet another example of how my life-long search for a situation in which Algebra would be applicable and useful remains just an empty promise from my high school Algebra teacher.  There is no balancing the cancer equation.  There is no solving for X or Y and there are certainly no easy solutions and sometimes there are no solutions at all.

I decided to start simply and lookup the definition of cancer and this is what I found:

/can·cer/[ˈkansər] noun-the disease caused by an uncontrolled division of abnormal cells in a part of the body.

Well, that sounded practically harmless. It certainly didn’t paint the picture of the shit show that has been our life for the last several months.  So I read on:

Now I was getting somewhere. This is more accurate.  Thank you, Oxford Dictionaries©, for recognizing cancer for the bastardly equal opportunity butt licking tribulation of chaos it is. The day that sometimes seemed to be moving further away instead of closer finally arrived. Kevin completed his 32nd and final radiation treatment on February 16th. I have chronicled some of the brutal side effects he has suffered over the last couple of

months and it has been excruciating to witness so I cannot venture to imagine what it was actually like for him to experience it firsthand.  Each day of radiation took more and more out of and from Kevin.  Although he is unable to eat anything other than the Boost Plus shakes and water, he managed to avoid the feeding tube. I am not sure why the folks weighing him didn’t notice that he had 7 layers of clothing on and a jacket when it was 70 degrees; not to mention the $17.00 of change in his pockets, but I guess that is none of my business (insert eye roll here).  When the radiologist told us that the results of skull based radiation are traumatic, he wasn’t just whistling Dixie.  The physical toll has been extremely difficult to witness.  The weight loss, the vomiting, the pain in his head, mouth, throat and face, the skin changes, the loss of hair, the extreme fatigue, and the dead and burnt flesh and mucous he flushes from his nose several time a day—let’s just say, pussies need not apply.

The physical impact has been hard, but the emotional toll it has taken on him has been equally as brutal and nearly unbearable for me to stand. I think most people who know Kevin would agree with the fact that he is pretty laid back.  He doesn’t ruffle easy, nor does he get too excited about much.  Whereas I tend to get super excited about things such as when the Cheerios left in my bowl make the shape of a rabbit or I see a red fox cross the road or when every single sock in a load of laundry has a mate (a true miracle akin to the statue of the Virgin Mother crying tears of blood).  I worry about coyotes chasing me on my way back from the barn and lose sleep pondering my chances of being filleted by a serial killer and wondering what picture my family would use if I went missing.  If our brains were colors, his would probably be a calm constant shade of calming blue and mine would be a bag of Skittles.  I guess that is why the extreme anxiety and ill-ease he experienced had us both on the ropes.  Seriously, folks, there is only one crazy seat on this train and I am in it.

The babies welcoming their daddy home.

We were beyond relieved to return home. Stefon Klugg graciously shuttled my step-dad, Ron and baby sister, Emily, to Houston in his super cool plane and they drove our truck back, while Mr. Klug flew us to our homeland.  Not only did we avoid putting Kevin on a commercial flight (a.k.a. a flying incubator of germs), we were also welcomed at the airport by a host of family and friends.  There were hugs and tears and some more hugs and some more tears.  I had tried to warn those eager hosts that the man I took to Houston was not the same man I was bringing home, but some were not prepared.  Cancer and his caustic sidekick radiation had worked him over…but we were finally home. We were surrounded by people who love us, which is really what home is and it felt AMAZING. 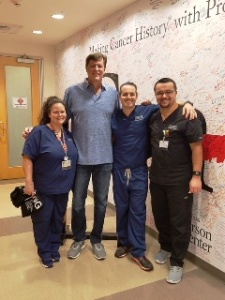 As we try to acclimate back to some sort of normal (believe me I am using this term in the loosest sense) life, Kevin struggles every single day with the lingering effects of the radiation. He still is only able to tolerate Boost shakes, water, and we recently added bone broth to his menu.  Some days are better than others.  He is weak and tires easily, has intermittent pain and discomfort and continues with a lengthy regimen of sinus rinses, mouth swishes, fluoride treatments and skin creams.  He has dropped more weight and has only slept twice through the night since we have been home.  His taste buds are completely out of order and the few attempts he has made at tasting food resulted in the same conclusion:  “it tastes like ass”.  Although he has used this same phrase to describe some of my cooking in the past, this time it has nothing to do with my lack of culinary skills.  In spite of all the struggles, he is making progress and for that I am immensely grateful.

It has been a long road and I am perpetually exhausted, both physically and emotionally.  There has never been a season in my life where I have felt more completely helpless.  There were days when my attempts to find ways to ease his misery were nothing more than exercises in futility. As he continues to grow stronger and his health is restored, I hope that I am able to dial down my heightened state of constant readiness; my personal goal is to at least plateau at DEFCON 3 on or before April 1st.  In so many ways I feel like I have been holding my breath since this ordeal began and I am apprehensive to exhale.  I don’t want God to interpret my need to breathe as a sign of being complaisant.  I am not sure how to balance the joy of being on the downhill side with my need to stand vigil for any sign of trouble returning.  I really don’t think it is too much to ask to have left Houston with at least a ’30 Year Cancer Free Guarantee’.  So many things about this stupid disease do not add up-there are no simple solutions.  We may not be stepping into tomorrow with a bumper-to-bumper warranty, but we certainly aren’t empty handed and our hearts are so full because…

I appreciate you allowing me this venue to express my fears, frustrations and the plethora of other unpleasant emotions. Thank you for tolerating my posts about mucous, puke, sinus flushes, and burnt flesh.  Above all, thank for your unwavering love.  I want to leave you with a smile (maybe even a chuckle).  I have been given temporary custody of my grandcat, Fiona.  She is the sweetest most precious cat in all the land.  Her beautiful long fur wasn’t brushed daily in our absence and became matted.  I thought you might want to see the end result, when I had to shave my daughter’s pussy kitty.