There was a time not so long ago that the avoidance of national and world news by my sister, Kim, was viewed by me as bordering on irresponsible. I would ask her opinions on a crisis, mass murder, or natural disaster and she would respond with, “I have no idea what you are talking about and I don’t want to know. So, shut up.” Recently, I have started to envy her ability to close herself off from the world that seems to be unraveling. It seems to be open season on human beings killing one another has had me considering looking for real estate under one of the secluded rocks she likes to hide under. The world is a scary place.

One would think that with all the headlines screaming violence, I would be extra vigilant in protecting myself, my family, and my home from the volatile world. In many ways I am. I have educated myself on gun and personal safety and I have obtained my Conceal and Carry permit. I have purchased a firearm I am comfortable carrying, handling, and shooting. While traveling, I try to be aware of my surroundings and not put myself in vulnerable situations. But Sunday morning, when a homeless young man showed up on my porch asking for a drink of water, my heart overrode my brain and I invited him inside for breakfast.

He couldn’t have been more than 20 and he had a heavy pack and a long road ahead of him. It wasn’t just hot; it was MISSOURI sticky-sweaty-humid-as-hell hot. When I went outside and handed him a couple bottles of water he was very grateful and thankful for my offering and as I watched this kid turn back toward the highway, it never crossed my mind that this shaggy-haired tattooed kid with more than one piercing was a serial killer or an axe murder. All I saw was a kid who probably needed something in his belly and so I called after him, “Hey, are you hungry?”

After offering him a seat at the table, I made him a plate of biscuits and gravy, something to drink, salt and pepper, etc. His only request was a napkin which he placed in his lap. While he ate, I asked him where he was headed and if he had any family in the area. I didn’t want to pry. It was obvious this kid had a story, but it isn’t my story to tell. He ate. He said very little.

Things really got interesting when I went to the bedroom to give my husband, Kevin, a heads that I was feeding a wayward stranger breakfast. He was not overcome by the warm fuzzy feeling of helping out our fellow man. In fact, I believe the emotion I identified reflected in Kevin at that moment was: completely pissed off. We had a rare and heated exchange in whisper voices:

Kevin: What in the hell were you thinking?

Me: I don’t know. What was I supposed to do, let him starve?

Kevin: NOT invite him inside the house would be a reasonable thing to do.

Me: I had to invite him in so he could eat biscuits and gravy.

Kevin: You know better!!! I can’t believe you.

In all my arguments with Kevin I end up sounding like a toddler, especially when confined to whispers. It is hard to really sell a good point in ‘whisper voice’. Kevin went into full protector mode talking briefly with the young man and seeing him on his way, all the while keeping our .38 in his pocket. He made sure the kid made his way down the highway and proceeded with the following: Complete perimeter check, locked and secured all doors, reviewed the security modus operandi with the kids for locking cars and doors, emphasizing the point that someone had breached security protocol and so we were all going to have to be EXTRA vigilant for the next few weeks (followed by an accusing stare at me for my reckless behavior).

I went about my day justifying in my own mind what I failed to articulate to my husband. Later that afternoon, I asked if he was still angry at me for inviting a potential murderer, terrorist, puppy kicker inside for breakfast. He assured me he was not mad, but I had to promise not to do it again. I was compelled to try and justify my actions and I probably should have just made my promise and kept my mouth shut.

Me: Kevin, I traveled thousands of miles around the world to feed hungry children in Africa! Do you think I could just let a kid starve on my front porch?

Kevin: Of course not, you invite him in and feed him biscuits and gravy. We will see what a good idea it is when he comes back and kills us in our sleep and steals all our shit.

Kevin is right the world is a scary place and I could have very well invited danger into our home. I appreciate his ability to protect us and keep us safe. I do hope that in some small fashion he finds a way to appreciate the innate flaw in me that allows my heart override my head in some situations. The truth is, I am so caught up in my own crazy life I neglect so many opportunities to make a difference in the lives of others. My focus has gotten so blurred that it has become easier to see only what I don’t have and I have become blind and complacent to the abundance of my blessings. I hear the news, read the headlines, and I become consumed by all the things that separate us. I needed a reminder of the one thing we have in common; at the end of the day, we are all just human beings.

Perhaps the good Lord sent that young man to my door to remind me that I need to look for opportunities to lift up others around me. Perhaps, it was God himself coming to the door as a scruffy homeless kid to see if I would give him a drink or turn him away. Truly If nothing else, I can rest easy knowing that had I been chopped up by the biscuit eating guest, I would probably go to heaven (the way I am quick to anger, cuss like a sailor, struggle with envy and pride and occasional slothfulness I need all the help I can get)….AND if it was God testing us, I fed him biscuits and gravy and Kevin covertly held a gun on him while he ate them (I am still winning). We make a great team– I can try and save the world and he can try to save me from the world…and myself…and coyotes….and spiders…and BigFoot… I think this text he sent me says it all: 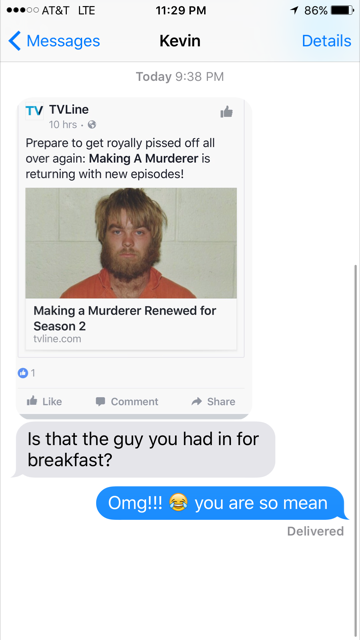