The majority of moments allotted to me thus far have passed without greatly influencing the overall direction of my life or altering the composition of my heart.   There are, however, those moments impacting with such force the reverberation pulses in every moment thereafter. Some are positive in nature, other seemingly devastating, but all are life-changing.   November 12, 2014, marks the 23nd  anniversary of one of the most powerful impact moments of my life…the day my daughter, Riley, was born.

As a nineteen year old college student with a propensity for making poor life choices, discovering I was pregnant certainly didn’t seem like a positive impact moment.  I was terrified.  I was aware of my less than stellar track record for taking care of myself, which made me feel completely sorry for the Tic-Tac-sized fetus attached to the wall of my uterus.  I wasn’t even good at playing house when I was little and got into trouble for cutting the piggy-tails off my sister’s dolls.  There was no way I was going to be able to take care of an actual human baby!  I was screwed, but not nearly as screwed as the little he or she inside of me for drawing the short straw and getting me for a mother.

The next 8 months I read everything I could get my hands on regarding prenatal care, breastfeeding, childbirth and parenting.  I followed the doctor’s orders to the letter and set my sights on giving this baby a better mother than the person I had been up to this point.  As my due date approached, I had started to worry about the pain of actually having the baby.  I asked my mom if it hurt to have a baby and she said, “I will tell you exactly what your grandma told me when I asked her that question when I was pregnant with you.  She said: would it hurt to shit a square wagon wheel?”  The wisdom passed down through the generations of women in my family is priceless and, as I was about to learn, amazingly accurate.

Because I was not covered under my parent’s insurance for maternity service, I saw the doctors through the local Health Department.  During my 24 week checkup I was informed that I would either have to pay $400.00 before my next visit or sign a waiver declining the use of an epidural.  The amount of emotional and financial headaches I had caused my parents over my 19 years on the planet loomed in the back of my mind, but so did my grandma’s square wagon wheel analogy.  In the end, I couldn’t ask my parents for the money and I signed the waiver, which seemed like a very, very considerate gesture on my part.  In hindsight, however, it was a VERY, VERY, incredibly STUPID move on my part.

Riley and Daddy (and the Devil dog)

Where do mommies-to-be go, when they can’t stand the thought of being pregnant one more second?  They walk (waddle) around Wal-Mart, of course.  I think Wal-Mart might even hold breakout sessions at the OB/GYN conferences around the nation encouraging doctors to advise women that strolling the aisles at Wal-Mart is scientifically proven to induce labor.  In my case, that is exactly what happened.  I was with my best friend, Cheri, and we were walking through the store.  She absently put her hand on stomach and she said, “Oh my God! You are having a contraction!”  My stomach was tight, but it didn’t hurt so it wasn’t computing with me.  I said, “No I’m not.”  She insisted, “Yes you are!  That’s exactly what my Aunt Tina’s belly felt like when she had a contraction.”  Since her Aunt Tina had just had a baby a few months earlier, I figured she knew more than I did about birthin’ babies.  As it turns out   Cheri was spot on with her diagnosis-I was in labor and ol’ Grandma also hit the nail on the head- it hurts like hell to shit a square wagon wheel!!!!

After laboring more than sixteen hours I had finally achieved a whopping 4 on the dilatation scale.  The lady who was laboring on the other side of the curtain (OMG…they actually used to put two women in labor in the same room) had arrived a few hours after me and was already dilated to an 8.  I was exhausted and hurting and I yelled, “Are you kidding? I hate that bitch?”  My sweet angelic mother promptly poked her head around the curtain and said, “I am sorry.  She is so tired she doesn’t mean it.”  I loudly clarified, “YES I DO MEAN IT!”  A few hours later, I hadn’t progressed much further and the contractions were excruciating.  During the quiet moments between contractions, my mom asked my nurse to please see about getting me an epidural.  I wanted to explain my noble decision of waiving the epidural, but I was beyond fatigued and the nurse had to explain to Mom the epidural “fee upfront” policy.  My mother started frantically looking around for her purse, “I will write you a check.  Just get the kid an epidural!!”  My mom’s attempts to circumvent hospital policy were politely denied and she cried at my bedside through each contraction.

My labor was approaching its 29th hour and my stubborn cervix finally made it to the required 10 centimeters and I was cleared for transfer to the delivery room.  I actually passed my former labor room roommate pushing her baby in the hallway as I was being wheeled to the delivery room.  She was fortunate I was too physically and emotionally tapped out to verbally accost her.  If I had any preconceived notions that things were going to soon be over, I was wrong.  I pushed and pushed and pushed and pushed.  The clock was ticking ever closer to midnight and my mom was determined that I was going to have my baby before November 12th became November 13th.  November 12th is Mom’s Birthday.  An intern assisting my doctor with the delivery tried to show pictures of his kids to one of the nurses and he ventured too close to me and I grabbed him by the tie and said, “Everyone in the hospital has seen those f@#@king pictures.  Put them away!!”  Between contractions I decided to take off my oxygen mask, remove the monitors strapped around my enormous belly and tried to climb off the table announcing, “I can’t do this anymore.  I am going home.”   My mom grabbed me by the arm and demanded, “You get up on this bed and you have this baby right now!!  It’s almost not my Birthday anymore!!”  And so it was; I pushed and pushed and the doctor and the intern pulled and pulled and at 11:51pm on her grandma’s birthday, our Riley was born.

The first time I held her was an impact moment of epic proportions.  The 8 pounds and 2 ounces of bald, cone-headed, swollen baby held the key to my heart.  I was smitten. She has been uniquely Riley from that moment forward and a source of immeasurable joy in my life.   It is hard to believe that 22 years have passed since the day Riley came into my life and I can’t begin to quantify the blessing being her mother has brought to my life.  Here are just a few of the things I love about Riley and some of the things I have learned by being her mom:

On the day she was born, if I had taken every hope I had for her future, it would hardly measure up to the young woman she has grown up to be.  Thank you, Riley, for being the daughter that surpassed everything my heart could desire.  I love you infinity. 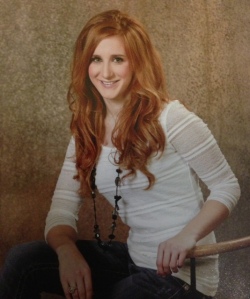