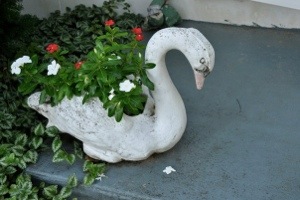 My family had to say goodbye to a fantastic lady today. After 95 years, my grandmother, Violet Stephens, ended her journey on this earth. This special lady left this world just as a person of her caliber should have—surrounded by people who loved and adored her. I wasn’t there when she passed, but I did love and adore her. I was fortunate that she spent the last year living in the nursing facility where I work. So, I got to see her and hug her and kiss her anytime I want. She was precious.

The truth is, she wasn’t even my biological grandma. I was a step. Sometimes that can be complicated. I was 13 years old when I became her grandchild and there was little else more complicated than I was at that age (except for maybe ages 15-19). It wasn’t complicated for Grandma. She just lumped my sister and me in with the rest of them and loved us like she had been there when they cut our cords. I would like to say it was because we were so special, but that wasn’t is at all. It was because she was special.

Grandma was a gentile sprit and kind nearly to a fault. She was the type of person who would go out of her way for other people and wouldn’t expect anything in return. She was someone I didn’t want to disappoint, because she was just such a doll. Once, when my sister and I were spending the night with her and my grandpa, she brought us a flashlight. She said, “Girls, I am giving you this flashlight so you won’t get lost if you have to get up in the night to use the bathroom.” I can’t really capture how endearing this gesture was. The bathroom was literally three steps outside the room where we were sleeping. The house was tiny and cozy and there was exactly zero chance of us getting lost. She was precious.

There was something I should have told Grandma and I didn’t. This isn’t like me at all, because I am pretty forthcoming about my plethora of blunders. I was sixteen and attending a family gathering at Grandma’s. Nearly everyone had congregated in the backyard and I had made my way to the sit on the front step. I was sitting next to a concrete planter that was fashioned into the shape of a swan. It was full of blooming red flowers and I casually reached up and put my hand around the beak of the swan. A good-sized portion of the beak broke off into my hand. Looking back, I know that Grandma would have just brushed it aside had I taken the beak to her and told her what had happened. But I didn’t. I did what I sometimes do in sticky situations–I improvised. I used the gum I was chewing to stick the beak back into place. I am normally not a good secret keeper, but I kept this one for a long time.

Twenty-six years have passed and as of yesterday, that swan with the bum beak was still sitting in front of Grandma’s house. I came clean to my sisters and my step-dad a few years ago and they have all teased me about telling Grandma I broke her swan planter. They never told either. I should have told her. It wouldn’t have mattered to her. It mattered to me.

A few months ago Grandma became very sick and we had to take her to the hospital. I went and sat with her until my aunts and uncles could get there. She was weak and barely able to stay awake or talk. Several times she opened her eyes and I would smile and say, “Hi there, Sleeping Beauty.” Each time that day she said the same thing to me: You aren’t my real grandchild. You aren’t my great-grandchild. You are a really great grandchild. She had never said that to me before that day and never said it to me again. I should have told her then I broke her swan.

At her funeral, my mom (who is a dynamic speaker) shared that my Grandma had left a note to her and my step-dad on a visit to their home about fifteen years ago. It was also something Grandma hadn’t spoken to them about before or since she left it. It was a request to have the following poem read at her funeral:

When I come to the end of the road
And the sun has set for me
I want no rites in a gloom-filled room
Why cry for a soul set free?

For this is a journey that we all must take
And each must go alone.
It’s all part of the Master’s plan
A step on the road to home

When you are lonely and sick of heart
Go to the friends we know
And bury your sorrows in doing good deeds
Miss me but let me go.

My Grandma didn’t have many worldly possessions. She didn’t need many. She was content in her family, faith and community. I am a step. Sometimes that gets complicated, but I have decided to ask for the broken swan. I think it would look lovely on my porch with the flowers blooming and a broken beak. Moreover, it will serve to remind me to strive to be more like her. Maybe I can choose to focus on the good in people, to serve others more and to put God and family first. I get that wrong a lot of the time. She got it right. If I am entrusted with the planter, I hope Grandma knows it will be the most treasured broken swan this side of heaven. 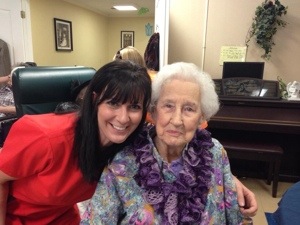