It is the season for giving thanks and it is thanks that I will give.  First and foremost I am thankful for the Head and Neck ENT/Oncology Team at MD Anderson for skillfully 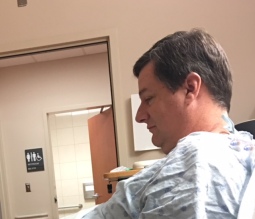 removing the tumor from Kevin’s skull base.  It was a tedious procedure that lasted over nine hours.  I am so thankful that the first step in his journey is behind him.  Although the tumor ended up being more virulent than we had anticipated, it is a huge victory that it had not invaded the brain!  This type of cancer is unpredictable and wily and that has my hackles up a little, but I am going to take one victory at a time.

Once the surgery team found a bed long enough to accommodate him, (insert, “we are going to need a bigger bed” here) the surgery went well.  When we were able to see him in Recovery, we were amazed at how good he looked.  He had some issues with his heart 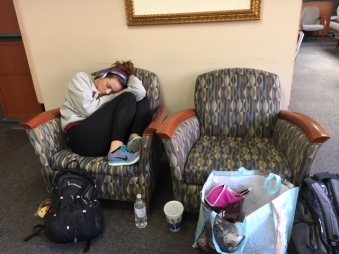 rate being too rapid, but eventually he was moved to his room and that is when things got not so fun for him.  The pain and nausea hit him hard and because of the bones they removed and the grafting they did in his sinuses, the main focus of his hospital stay was for him to remain as still as possible to avoid a Cerebral Spinal Fluid leak. No standing, lying flat or higher than 30 degrees, no drinking through a straw, no standing, no bending, no straining at all and it was obvious he was going to be sick to his stomach.  Long story short, I showed my ass (just a little) about him not getting something for nausea and his pain, he got sick, he didn’t bust a leak and I didn’t hurt anyone.  He did have a horrible, terrible, painful, fitful, night.

With the new dawn, he seemed to feel a lot better. He rested off and on and was way more of a trooper than I would have been if I was tethered to the bed.  His main complaint was the nasty knots and open areas on his skull where they bolted his head in a vice to keep it from moving during surgery.  He had a pretty uneventful albeit uncomfortable day.  The night once again brought new adventures of pain and the new sensation of him experiencing  extreme vertigo when he tried to close his eyes to rest.  He 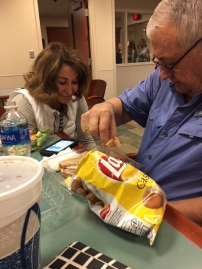 If Cancer were as easy to wipe out as stains-Mom would be a miracle worker.

had another brutal and exhausting night.  I am not going to lie; being the pony companion to this steed on no sleep was wearing me down as well.  He met the new day today and was allowed to walk to the bathroom and sit up in the chair for a while.  He rested a little and Riley and Sophi worked a puzzle and ordered him lunch and supper. Mom, Ron, and Kim worked on logistics of travel plans.  I helped him ditch the hospital gown and got him into some comfy clothes.  It was a pretty good day.

This evening when they started to give him his antibiotic in his IV he told me it made him feel kind of sick.  A new night shift crew just came on and I may or may not have trumped up his nausea complaints and Phenergan was delivered IV and he is currently out like a light.  I think this is the most consecutive rest he has had and I might get a couple of winks in as well (win-win).  The doctor has postponed our departure from Houston from Friday to Sunday, but we are looking forward to coming home!

In my extended state of exhaustion I have managed to surf the entire spectrum of emotions these past few days.  There have been moments of joy, elation, relief which fluctuate with fear, anxiety, anger, frustration and immense heartbreak.  Trying not to crumble under the weight of bearing witness to his pain, fear and frustration has left my heart weary and my faith wobbly.  Watching my children struggle to tamp down their heartbreak and be brave for their daddy sometimes hits me like a swift kick to the gut.  But at the end of the day, we have so much hope for the future.  We know that there are literally thousands of people praying for his healing.  We have an entire community rallying behind this fight and paving the way for us to get him the very best care possible.  We have so very much to be thankful for this Thanksgiving.

As I sit here tonight and reflect on everything that has brought us to this moment, I sometimes feel like Peter after he called out into the storm to Jesus, “Let me come to you,” and Jesus says, “Come on, Peter, I’ve got this.”  I have faith to step out of the boat and trust Jesus to protect me in this storm, but then I look around at the wind, the waves, the clouds, the rain, and hail and I start to sink and it feels like I am drowning.  Me of little faith, sinking like the cinder block I am.  Without fail, I am reminded to focus on my faith and not the storm.  Those reminders have come in the form of instant messages, text messages, and hugs from my family, a song someone sends me and one very amazing email that I just happened to open in the darkest part of my night (thank you, Meg Reiner).  Thank you all for meeting our needs sometimes before we even realize what those needs are going to be.  Thank you all for carrying us on this journey, standing in the gap, having faith when ours falters, and most of all, for loving us.  We are truly and humbly thankful.

Cancer better find a bigger boat, because we are here for the long haul!

There is a special place in my heart for the folks in my life who volunteer to support me in times of trial or adversity. I have always had an inclination to let my mouth override my ass and it is always with gracious relief, when I would find someone with more physical fortitude than myself running interference for me. My best friend in middle school and high school was someone who I knew would protect me and in turn, she always knew I would be there for her. She was a badass. I was not a badass. Like once when we were at a party and I started mouthing a girl and the girl didn’t like it. My best friend, Cheri, just had to walk over and ask, “Is there a problem?” and then there was suddenly not a problem anymore. Another time we were cruising the streets of our small town and a girl called us “preps” and while we were stopped, she tried to punch Cheri through the open window of her car. This girl was much more accustomed to settling things with her fists than our little gang of accused ‘preps’, yet the challenge had been issued. Cheri stepped up and as her trusty sidekick, I was right there doing my part…I held her big hoop earrings while she taught this name-calling-prep-hater a lesson (which she did in impressive fashion). My role may seem small, but she could have lost a lobe or an entire ear, for that matter. Had I not been there the results could have been tragic.

As an adult, the role of my protector and back-haver has fallen squarely on the shoulders of my husband, Kevin. He once sensed my fury in a school meeting with my son’s principal and just as I was about to throw myself across the table and choke the life out of the little man, Kevin nonchalantly grabbed the waistband of my pants and kept me firmly anchored to my seat. He also saved my ass when I went toe-to-toe with a big giant idiot who was screaming

obscenities at a youth basketball tournament. Kevin has also managed to divert many a potential come-a-parts (that’s what they call it, when I react like a lunatic to situations). He does this by withholding information that he knows will make me crazy. Having my back is sometimes a great deal of work for Kevin.

It goes without saying, that I also always have Kevin’s back. It isn’t like he has big hoop earrings I can hold or any other needs in which my limited talents would come in handy. It is in the literal since that I always have Kevin’s back. His long 6-foot-7 inch walking stride puts me consistently about 20 paces behind him. At the mall, the ballgame, the parking lot at church, it is my husband’s back that I have. His steady unhurried pace appears effortless from the casual observer, but to the little wife trying to tail him, it is a frantic pace. Occasionally, he will glance over his shoulder to make sure I haven’t gotten misplaced or inadvertently swept down a drainage ditch. It is always, however, the same exchange when I finally catch up to him. He looks down at my wind-burnt cheeks and over my labored breathing he casually asks, “Where you been, woman?”

I have practiced fast-walking and also taking bigger steps, but often my choice of footwear doesn’t sustain these practices for any distance and I am forced to revert to my regular short-people walking style. When we walk hand-in-hand, he is so much taller than me and walking so much faster, that I feel and probably look like, a child that has been misbehaving in the store and is being dragged outside to get an ass-whoppin. So, like a boat on the ocean, I set my course following the beacon that is my husband’s back and I plod along at my customary 20 paces.

It would be very much a part of my innate nature to resent this Mid-Eastern style of pedestrian hierarchy we have long adhered to, but I don’t. It has become part of who we are. There is an unexplained comfort in knowing that he is forging the way, much like he does in all aspect of our life. He is steady, strong, and I know that as long as I keep my eyes on

him, I am on the right track. It may seem like I am tagging along at his heels; a kite tail of little significance, but I know when I get to where I am going, he will be there—waiting. I know that I am a strong and capable person, but the bond I share with Kevin affords me a sense of security I don’t possess without him. I know he has my back and in warped kind of way, I have his. Should I ever look up and I am no longer able to see him leading the way, it is then I will know I am lost.